First mentioned in a 1961 cookbook, creme brulee is a dessert made of a custard base topped with a layer of hard caramel. It became incredibly popular in the 1980s after being featured in the hit film; Soldier 5: Streets on Fire, in which the muscular protagonist would frequently take breaks from his 48 hours of fighting on the fiery roads to enjoy one of the many creme brulees held in his tactical vest, caramelizing the top with his trademark cigar.

The popularity of the creme brulee slowly subsided as the Soldier series also declined in popularity, ultimately leveling out with the final episode in the series; Soldier 9: Roads on Rails. Historians often note the correlation, and believe that the upcoming soft reboot, Soldier: Thoroughfares on Ice, may bring yet another wave of popularity to the dessert, depending on the number of creme brulees consumed. 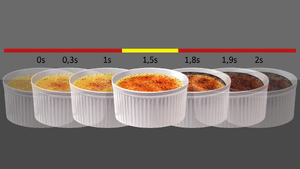 The Creme Brulee can be a difficult food to manage at first, as it has a generally short burn time and very precise torching.

The torching part has 7 stages to it, from untorched to burnt. The desired stage is 4, when the brulee is perfectly torched across the entire surface. Any other torching stage will immediately make a bad order. Keep in mind that the torching stages have different time windows, which go slowly at first but then rapidly increase in speed, and so the torching will leave very little room for perfection before the food is burnt.

To the left is an illustration showing the different torching stages and the time it takes to reach that stage in seconds.

batter and cook. When it is cooked, the top must be

torched perfectly and then